Muslims Need To Calm Down About Boycotts

A sister who works at an Islamic school once received a Starbucks gift card from one of her co-workers. Unaware of the issue of boycotting Starbucks, she unknowingly walked into the teachers lounge one morning with a small Mocha in hand. She was then met with an uproar from her fellow Muslim staff. Without kindly explaining anything to her, they yelled at her, told her she wasn’t allowed in the room, that her drink was killing Palestinian babies, and that she didn’t care about Muslims in Palestine.

The sister apologized repeatedly, trying to explain that she didn’t know about the boycott and that she purchased her drink using a gift card. When the angry Muslim staff refused to listen and one of them began to cry, she then threw her nearly full drink away.

We Muslims need to calm down a bit when it comes to this boycott issue. For years we’ve been blindly sending out Emails and messages with collections of links and information on possible connections between certain corporations and the Israeli government and military. However, in the middle of this attempt to support our Palestinian brothers and sisters, we’ve lost our heads over some key important issues.

A Lack of Corporate Understanding

It also seems as if we need a better understanding of the nature of public entities. In the midst of the heightened Israeli oppression in Gaza, corporations under the spotlight of have received increased pressure from boycotters. Here are some responses as recent as a few weeks ago.

Facts about Starbucks in the Middle East

Is it true that Starbucks provides financial support to Israel?

No. This is absolutely untrue. Rumors that Starbucks Coffee Company provides financial support to the Israeli government and/or the Israeli Army are unequivocally false. Starbucks is a publicly held company and as such, is required to disclose any corporate giving each year through a proxy statement. In addition, articles in the London Telegraph (U.K.), New Straits Times (Malaysia), and Spiked (online) provide an outside perspective on these false rumors.

Has Starbucks ever sent any of its profits to the Israeli government and/or Israeli army?

Is it true that Starbucks is teaming with other American corporations to send their last several weeks of profits to the Israeli government and/or the Israeli Army?

There are new rumors circulating on the internet regarding “McDonald’s donating profits to the war in Israel.” These rumors are absolutely false. McDonald’s never has and never will support war efforts in any area of the world through sales and profits in our restaurants.

In an effort to rally Arab boycotts against The Coca-Cola Company and other American companies, many variations of a rumor exist claiming that our company provides financial support to Israel. One widely circulated rumor claims NBC reported that Coca-Cola had announced it would donate four days’ profits to Israel.

Our Response: This information is not true, but has been circulated by ill-informed or ill-intentioned third parties. The Coca-Cola Company is not political, and does not support individual countries, governments or political or religious causes.

While websites like Innovative Minds do the most extensive job of documenting a case for boycotting those companies, I feel they stretch the corporate responsibility a bit too much. Any business operation by a corporation in Israel is deemed as “promoting Israel.” The site also links the private activities like those of Starbucks CEO Howard Schulz way too closely with the corporation as a public entity.

A simple study of the nature of financial reporting, and how the SEC has extremely strict regulations in the name of corporate transparency, would raise one’s brow quite high as to this claim. This could be one reason why we believe exaggerated Emails and text messages.

In an age where there is a wide array of information with little means of verification, this boycott issue has become complicated. Maybe the person didn’t know about the issue and was truly unaware, or they are just unsure about the facts.

If you see someone buying products and you feel they shouldn’t be, instead of chastising them, inform them politely and with respect. Losing your cool and having bad akhlāq (manners) will not get you anywhere in your position. The lack of akhlāq in the response of the Muslim teaching staff to the sister showed how we’ve allowed Shaytān to use this issue to his advantage.

The Self-Victimization Tendency of Muslims

Aside from bad manners, we Muslims also have a tendency to practice self-victimization. We’re way too quick to show that we’re being attacked and blame others for our problems, resulting in our tendency to overshoot things at times.

For example, many Muslims sent out and believed Email and text messages claiming that Starbucks and McDonald’s would be donating a week’s worth of revenue to the Israeli government. Not only is that far from impossible, it was embarrassing to know that Muslims believed such a ludicrous notion. Multi-million dollar corporations don’t give up days’ worth of sales revenue towards religious or political causes. They’d get owned by the SEC in a split second, let alone their stockholders. Are we Muslims so insecure about ourselves that we’ll believe anything we hear, or are we just that uneducated?

Based on how we’ve reacted to these boycotts and other secondary efforts to support our oppressed Palestinian brethren, it’s clear that we need to calm down and have more of a straight head about the issue altogether. I am not against the boycotts in any way, and am in fact for boycotting those companies and organizations that directly support the likes of Israel or Denmark. What I am saying, however, is we can do a better job of channeling our energy in supporting the Palestinian cause.

Gaza has been destroyed by the Israeli military machine. There are now hundreds of new needs to rebuild the strip, from building libraries, to purchasing and sending hospital and medical equipment, to all kinds of different needs for the area. We should channel our emotion over something as small as boycotting coffee, coke, and french fries to assembling a massive effort in working to rebuild Gaza for the future. 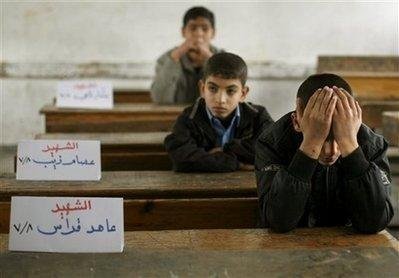 Until we do, we need to calm down when it comes to the boycotts.

Did they forget the next verse?