How Caesar examined the Prophet (Peace and mercy be upon him) 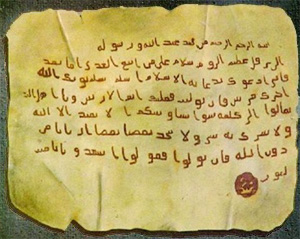 The Prophet wrote to the Caesar of the Byzantine Empire, inviting him to Islam, sending a letter to him with Dihya al-Kalbi. The Prophet directed him to present the letter to the governor of Busra, who would forward it to Caesar.

When God had relieved him of the Persian armies, Caesar walked from Emesa [in central Syria] to Jerusalem, out of gratitude to God for having inured him to trial. So when the letter of the Prophet reached him, Caesar read it and said, “Look for someone from his people around here, so that I may ask about this Messenger of God.”

Now, it happened that Abu Sufyan was then in Syria with some men from the Quraish tribe who had come on business during the truce that then existed between the Prophet and the disbelievers of the Quraish.

Abu Sufyan later said, “The emissary of Caesar found us in a part of Syria, and he took me and my companions to Jerusalem. There we were brought to Caesar, who was sitting at his royal court, his crown on his head, around him the grandees of Byzantium.”

Now, Caesar said to his interpreter, “Ask them who among them is closest in kinship to this man who claims to be a prophet.”

Abu Sufyan [who was not a Muslim at the time] responded that he was nearest of them in kinship.

Caesar asked, “And what is the relationship between you and him?”

Abu Sufyan said, “He is a son of my paternal uncle.” Then Caesar said, “Bring him closer,” and had Abu Sufyan’s companions placed behind him, at his shoulders. Then he told his interpreter, “Tell his companions that I am going to question him about this man who claims to be a prophet; so if he tells a lie, immediately repudiate it as a lie.”

Now, Caesar asked through his interpreter, “How is the lineage of this man among you?”
Abu Sufyan replied, “He is of noble descent among us.” Caesar asked, “And has any one of your people previously said what he has said?”

Caesar asked, “Had you found him a liar before he said what he has now said?”

Caesar asked, “Was any among his ancestors a king?”

Caesar asked, “And do the highborn people listen to him, or the powerless among them?”

Abu Sufyan answered, “Rather the powerless.”

Caesar asked, “And are they increasing or decreasing?”

Caesar asked, “And does anyone turn away discontent with his religion after having gone into it?”

Caesar asked, “Is he treacherous?”

Abu Sufyan replied, “No, but we are in a truce with him now, and we fear he may betray us.” Later on, Abu Sufyan admitted that this was the closest he was able to come to putting in a bad word against Muhammad.

Caesar went on, “Then have you fought each other?”

Caesar asked, “And how did your wars turn out?”

Abu Sufyan said, “Our contests have had alternating results; sometimes he wins over us, and other times we win over him.”

Caesar asked, “What does he enjoin upon you?”

Abu Sufyan replied, “He enjoins us to worship God alone, not associating anything with the sole divinity. And he enjoins us not to worship the fetishes of our ancestors. He also enjoins us to pray, to give charity, and to be chaste; and to fulfill promises and discharge trusts.”

When Abu Sufyan had said this, Caesar told his interpreter to say to him, “I asked you about his lineage among you, and you stated that he is of a sound lineage. And so were all prophets called forth from sound lineages of their people.

“And I asked you if you had found him a liar before he had said what he has said, and you stated that you had not. So I knew he would not lie about God if he did not lie about humans.

“And I asked you if the highborn people followed him, or the powerless ones; and you stated that it is the powerless. And they are the followers of the Messengers.

“And I asked you if anyone turns away disaffected with his religion after having gone into it, and you stated that none did; and so it is with Faith, with which no one is displeased when its cheerfulness mixes into hearts.

“And I asked you if he acts treacherously, and you stated that he does not. And so it is with all Messengers; they do not act treacherously.

“And I asked you if you fight with each other, and you stated that you did, and that your fortunes in war alternated, now in his favor, now in yours. And so are all Messengers tried, and final victory will be his.

“I knew he would appear, but I did not know he would be from among you. If what you have said is true, he will soon rule the ground beneath these two feet of mine. If I could expect to reach him, I would take it upon myself to go and meet him; and if I were with him, I would wash his feet.”

Then Caesar called for the letter of the Prophet, and it was read aloud. In it was this:

In the name of God, the Compassionate, the Merciful. From Muhammad, slave and messenger of God, to Heraclius, ruler of Byzantium. Peace upon all who follow Guidance.
Now then, I call you with the call to submission to God. Surrender to God, and you will be safe. Surrender to God, and God will give you a double reward. If you turn away, then the misdeeds of the peasants will be your fault.

And, people of the Book, come to a Word common to both of us, that we worship only God and do not associate anything with God, and that none of us takes any for lords but God. And if they turn away, then say, “Witness that we have surrendered to God.”

Now, when Heraclius Caesar finished his speech, a cry arose from the grandees of Byzantium around him. So great was their uproar that Abu Sufyan did not understand what they said; but he and his companions were ejected. When the men of the Quraish had left the court of the Byzantine emperor and were alone, Abu Sufyan said to them, “The affair of Muhammad has grown powerful; even the king of the pale people fears him!”
Later, Abu Sufyan related, “I lay low, by God, certain that the affair of Muhammad would emerge triumphant, until God brought my heart into Islam in spite of my aversion to it.”

Excerpted from “The Wisdom of the Prophet” by Thomas Cleary.

Who says Miracles Don’t Happen in Our Time?

16|82|But if they turn away, your only duty is clear communication.